When I was typing up the new tasting notes for our 2020 Kuluppis (koo-loo-pee) chardonnay, I realized I had no idea of the origin of the Robert Young clone (aka Clone 17). I knew it was named for the Robert Young Vineyard in Alexander Valley but not much beyond that. Soon, I was down a rabbit hole of chardonnay clones and the grape’s history and discovered a compelling story. (Thanks to Nancy Sweet, FPS Historian at UC Davis for her paper which I’ve borrowed heavily from here.)[1] 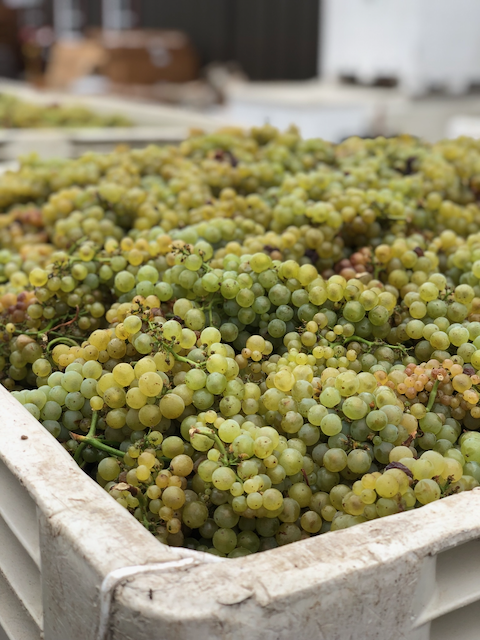 What we call chardonnay today started in the Mâconnais (Mac-o-nay) sub region of Burgundy, France (just north of the city of Lyon)[2]. The actual word ‘chardonnay’ today is a village in the Saône-et-Loire region of Burgundy and loosely translates from Latin as either (1) the name of a Roman landowner named Cardus who owned the village at the end of the Roman empire or (2) Cardonnacum the “place where thistles grow”[3] Tasty, huh?  Chardonnay is just the French version of the Latin name. The grape is a cross of two different grape varietals–pinot noir and a near extinct variety called gouais (goo-WAY) blanc[4]. It’s theorized that the pinot grape’s thicker skin, yield, and resistance to rot (unlike gouais blanc) helped the grape grow well, produce ample juice (meaning more wine yield), and retain the fresh apple aromatics and taste of the gouais blanc grape, an ancient Roman varietal. This hybrid grape formed the foundation for white Burgundy starting in the 13th century with Cistercian monks of the Abbey of Cîteaux. As the wine got better, the local Duke of Bourgogne ceded more land to the church for more vines and more wine for his own fame and fortune. The rest is history–chardonnay became the dominant grape of white burgundies and remains so 1,000 years later.[5]

In California, the history is a little more mixed and recent. Chardonnay was first available from grapevine nurseries, mainly in Southern California, as early as the 1880’s (originally marketed as ‘Chardonai’ or confused with Pinot Blanc). Little was planted in the state in the late 19th and early 20th centuries as mostly experimental vineyards. Fortunately, some budwood was imported directly from France by Charles Wetmore, a California Agricultural Commissioner, and planted at his vineyard La Cresta Blanca in Pleasanton, CA during this time[6]. It wasn’t until well after prohibition was repealed that it started to be seriously planted in the Wente Bros. vineyards in Livermore, using budwood from Wetmore’s vineyard as well as new clones directly from France. The combination of all these different chardonnay clones became known collectively as the “Wente clone” and served as the basis for the California chardonnay viticultural industry. Continuing research by both winemakers and academics at UC Davis during the 1940s and 1950s found that the Wente clone could make exceptional wines, but in cooler climate terroirs[7]. And that is where the story begins with our chardonnay.

Robert Young was a prune farmer in Alexander Valley of Sonoma who turned his interest to grapes in the 1950s. At the urging of UC Davis, Carl Wente, and Young’s own love of white burgundies, he was given budwood from Wente in 1962 and planted them at his vineyards in Alexander Valley. Wente’s experiments with different chardonnay clone sources and lack of documentation ‘muddies the water’ as to what exact clone(s) he gave Young. Soon enough, Young discovered that the chardonnay grapes from Wente’s cuttings made exceptional wine, grew well, and produced good tonnage – perfect for a commercial vineyard. In 1982, he submitted samples of his budwood to UC Davis’ Foundation Plant Services (FPS) to classify it as its own clone. In 1987, Clone 17 was officially adopted (also called the Robert Young Clone) and thus allowed nurseries to start cultivating the clone to sell other growers [8] (with Robert Young Vineyards written approval of course). 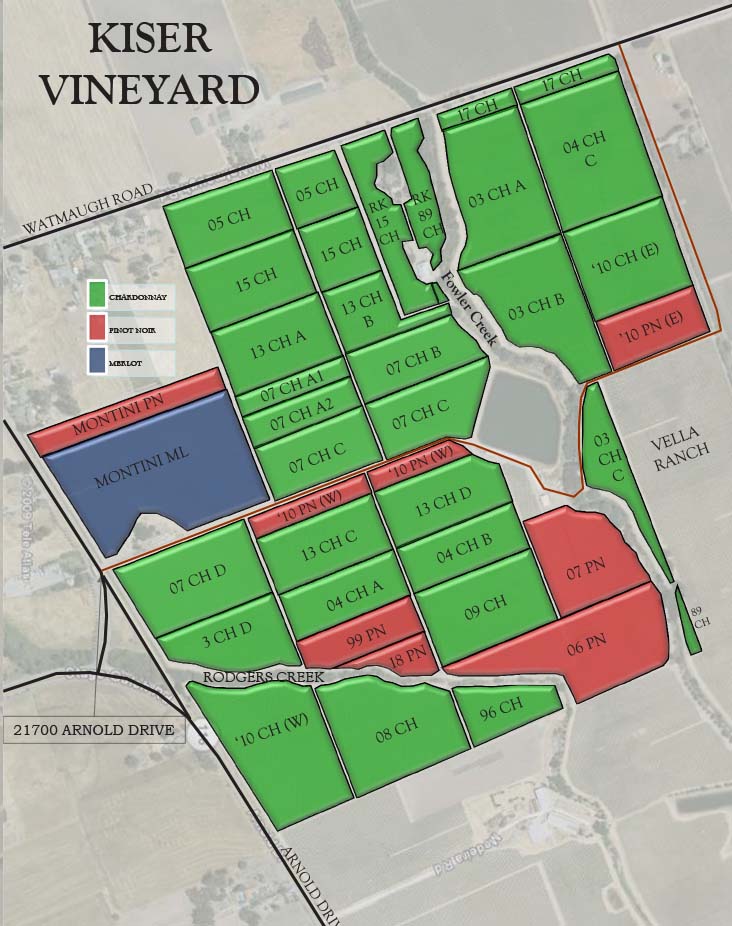 Our grapes come from the Sangiacomo Vineyards Kiser Vineyard location in Sonoma, CA (about 4 miles west from the Plaza at the center of town). Our block is labeled 07 CH C on the map and was planted in 2007. The Robert Young clone is one of 20 clones grown at the site[9]. We feel the clone, on this site, produces a beautiful fruit profile of ripe apples and pears. We age the chardonnay for 10 months in oak (about 40% new), sur lee (keeping the wine on the used yeast cells from fermentation), and frequently stir the contents every 3 weeks. This combination results in a rich, creamy, chardonnay with plenty of fruit and a long, lingering finish.

As you enjoy this 100% Robert Young chardonnay clone, think back to the journey those vines had. From 13th century Cistercian monks to early California grape nurseries and Wetmore, to the forethought of the Wente and Young families, to UC Davis, and especially to the Sangiacomo family for growing exceptional fruit year in and year out—the source of this delicious wine.